A new year, a new challenge. How many species can you catch on flies?  As the previous post points out... LOTS!  The 2023 Jamb-C begins this Sunday, January 1st, giving club members a chance to put "rainbow trout" into their list of entries. Several of the BREC ponds were recently stocked with the coldwater species. The trout fishing tends to taper off after a few weeks, due to fishing pressure and predation. So don't delay!

Rules are now updated on our "Jambalaya Challenge" webpage. New this year is "Fish of the Month".  Each month we'll recognize a particular entry to the Jamb-C.  It could be an unusual catch, a good size fish, or other outstanding entry. Send the photo entries to RSFFJam@gmail.com. This is the same email used to send photos for the Challenge.

Posted by Catch Cormier at 10:13 AM No comments: 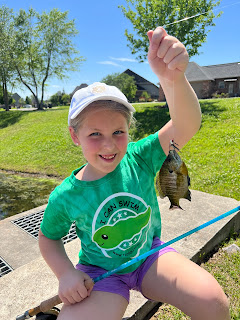 The second edition of the Red Stick Fly Fisher's Jambalaya Challenge has now come to a close and what a year it was!

For those unfamiliar the Jambalaya Challenge is our yearly fishing contest in which participants (free and open to all RSFF members) try to catch as many species with their fly rods as possible. Diversity of species is the name of the game in this contest and that's what we hope to highlight - all the different fish you can target and catch with a fly rod. 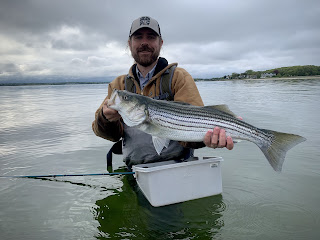 This year we had 16 participants who submitted 189 entries, with 75 different species being represented! This year participants caught fish in 13 states and across 3 countries. 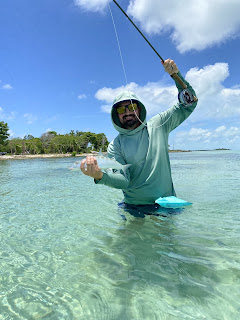 Congratulations to Chris Williams on finishing first two years in a row! He upped his species total from 43 last year to 55 this year and when you think about it that's more than 1 different species a week! What a year!

Congratulations are also in order for our first youth participant Marin Roussel! She may have competition next year as her sister is already chomping at the bit to get out and catch some fish herself. 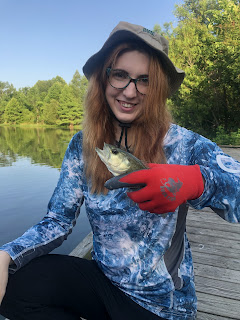 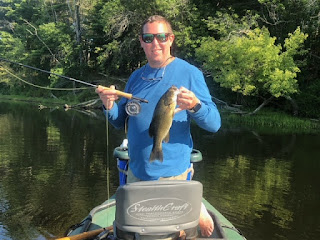 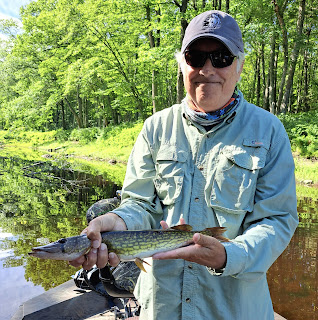 Much like last year the fly that caught the most species was the venerable Clouser's minnow. That fly catches just about everything! Other flies that were well represented were the Concordia Special, Woolly Buggers of all types, the Hot Head Damsel, and various beadhead nymphs, poppers, and soft hackles.

Each entry into the Jambalaya Challenge earned a separate raffle ticket, those awards were presented at the December meeting held this past Monday, several folks went home with some great prizes. If you want to get in on the action next year you are in luck because the 2023 edition of the Jambalaya Challenge will start on January 1st! 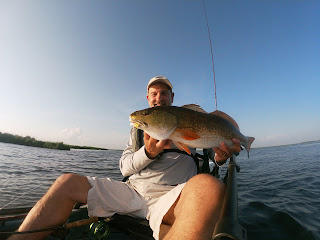 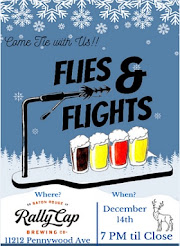 Due to the holiday season, the date for this month's Flies & Flights has been shifted forward by a week.  We'll meet on Wednesday, December 14th, at Rally Cap Brewing beginning at 7:00pm.  Location is 11212 Pennywood Ave in Baton Rouge.

F&F is not affliated with the Red Stick club, but all members are invited.  This is an independent collective of tiers just looking to tie and enjoy a social gathering with some fine brews.  Anyone can come and join in.  Some spare tools and materials are available for beginners.

With the annual stocking of trout in BREC ponds around Christmas, this would be a great time to tie a few patterns aimed at stocker rainbows. Chris will bring materials for a few different patterns (Rainbow Warrior, Green Weenie, Glo Bug). Tiers are welcomed to bring materials to share their favorites as well.

And in the spirit of Christmas, we'll be giving away three (3) material kits.  Kits include everything you'll need except the tools. We'll draw one name for each of the following:

Looking forward to seeing everyone!

Posted by Catch Cormier at 9:02 AM No comments:

The December meeting is our annual Christmas Banquet and Club Awards presentation.  This year, it will be held Monday, December 12th at our usual meeting location - Broadmoor UMC, Adult Education building Room 101.  Setup is 6:30pm, with the banquet at 7:00pm.

This is a potluck menu.  Members should be receiving an email with a list of food items that folks will be bringing.  Please check the latest emails to avoid bringing too much of one particular item.

We'll also be recognizing the winners of the 2022 Jambalaya Challenge year-long fishing contest.  Even if you weren't at the top of the most species caught on fly rod, you can still come away a winner from the drawing of consolation prizes.

Posted by Catch Cormier at 9:03 AM No comments: