Results of the 2021 Jambalaya Challenge 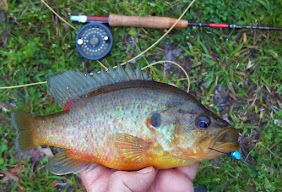 One of our favorite Cajun dishes, Jambalaya is a mixture of different ingredients brought together in one pot. Likewise, our Jambalaya Challenge is a CPRE (Catch/Photo/Release Encouraged) contest where different species are lumped into one - size doesn't matter, but diversity does!

For our first year, we had 115 entries! Over half of these came from two exceptional fly fishermen - Chris Williams and Ben Roussel. However, as stated in the rules, every participant will be eligible for the prizes drawing (1 ticket for each entry made, only one winner per drawing).

The most common species caught were Bluegill, Largemouth Bass, and Redear Sunfish - each with 6 entries.

The fly that caught the most species was the Clouser Minnow, followed by several variations of the Woolybugger. Other flies commonly used were Soft Hackles, Hares Ears, Pheasant Tails, Baby Leeches, variations of Fluff Butts, Boogle Bugs, and generic beadhead nymphs.

Awards and prizes will be given out at the January meeting. We'll also take suggestions for the 2022 Jambalaya Challenge which will kickoff on February 1st.